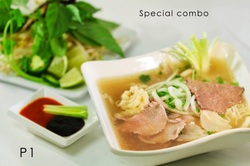 Pho, a traditional Vietnamese dish, has been around for decades. Originated from North Vietnam in Hanoi, its popularity soon spread to all corners of Vietnam. Today more than 17 different varieties of Pho can be found throughout the country. More often than not, Pho is made with beef, although other kinds of meat may be substituted. Chicken also makes a popular dish. Pho soup can be eaten for breakfast, lunch or dinner; it is customary for some families to eat Pho at least 3 times per week.

Here in America, Pho has become a very popular dish among American communities. Most Pho restaurants are single family owned establishments, each with its own taste and flavors that cater to different preferences among Vietnamese families. Pho Binh was also started as a single family owned restaurant, but our name quickly became popular with the Vietnamese in Houston’s community because of our authentic ‘Pho Bac’ taste that many critics agreed came close to the original Pho that began in Hanoi, North Vietnam.

Today Pho Binh has grown to 4 Vietnamese restaurants in the Houston area to cater to both Vietnamese and s teadily growing American families.  We’re proud of being voted one of thebest pho in Houston.  Here at Pho Binh, we are committed to serving our customers healthy and tasty pho soup, fresh meats and produce, and friendly service.